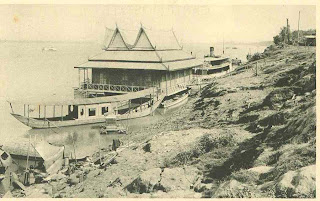 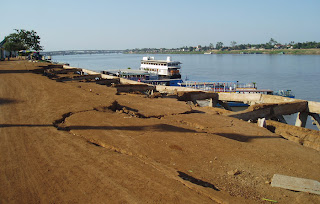 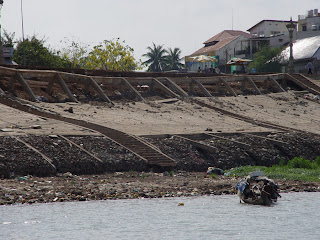 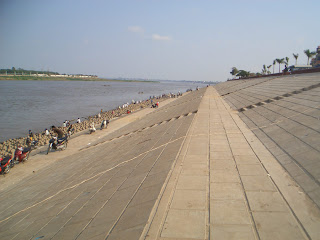 Fifty years ago there were no fancy restaurants or families out on strolls around the riverside, it was a rough and ready port area, and the chandlers, shipping companies and other businesses catered to the merchants and crews that rocked up there. Some of the oldest surviving businesses along the quay are the two coffin shops along the north stretch. They always seemed odd to me with all the other shops selling shoes and CDs nearby, but I guess they have been there for far longer, and somehow business is still good.
Known as the Riverside or Mot Tonle, a century or so back there were just muddy banks where it now stands. The road was at one time the only one in a north-south direction in the area.
The most northerly stretch of it collapsed and was rebuilt three or four times in the last decade before its latest makeover. Part of this stretch covers what used to be the entrance to a canal and perhaps this had some effect on its subsequent erosion and failure.
In recent years the riverside has been the scene of some major, and long overdue drainage works. While much of the work was hidden behind walls and billboards for nearly three years, a lot has gone on. The stretch that kept collapsing has been completely rebuilt, to a far higher standard than the previous structures. I hope it lasts a lot longer too. It has regular sets of steps along its length, and somehow the slope isn’t too steep to get a motorbike down either.
The first picture shows the area before an actual quay was built, perhaps in the late 19th century. The next two are of the collapsed quay from ground and river level in early 1996. The last is the new quay on a recent Saturday in February 2010, with the water very low and plenty of people fishing along the edge. It’s great to see so many people enjoying the riverfront again.
at 9:08 PM No comments: